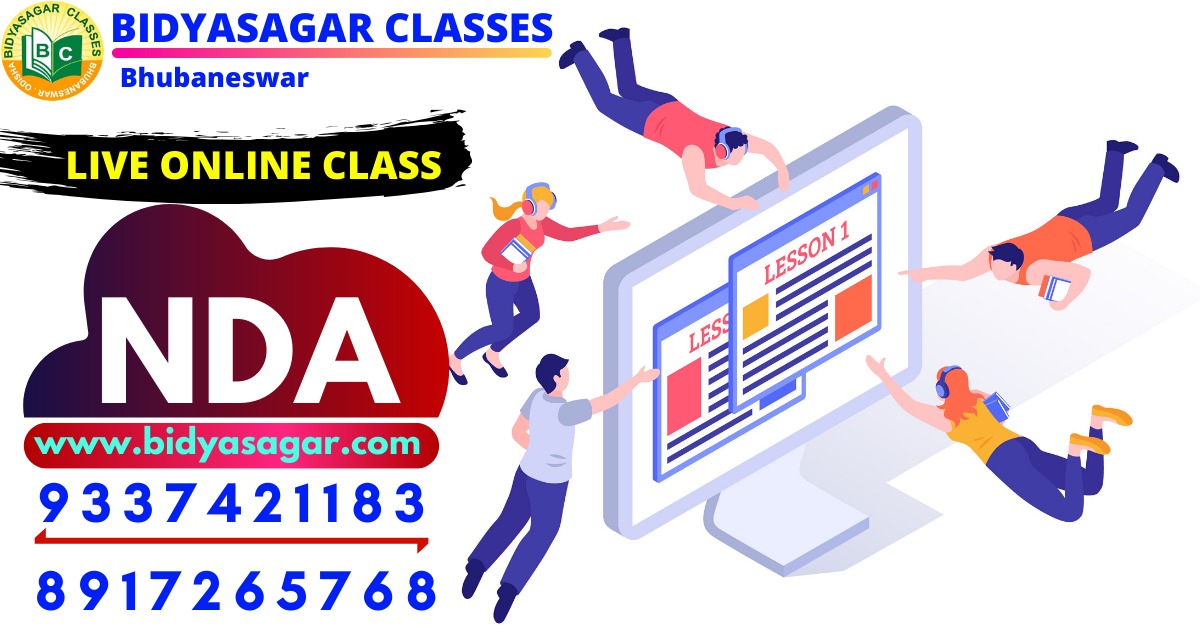 On the wake of present crisis we have decided to provide live online classes so that students can avail our quality NDA coaching in their home.For online live classes plz contact 9337421183 8917265768.You can join our regular classroom coaching once the restrictions are over.

Book Your Seat Now to get

National Defence Academy (NDA) is the unified services of the Indian Armed forces, wherein the cadets of three professional uniformed services (the Army, the Navy & the Air Force) drill together with one accord prior to pre-commission training at their academies. For this purpose we aware our candidates for joining us as a Best NDA Coaching Centres in Bhubaneswar . The motto of NDA is “Service Before Self” (Seva Paramo Dharam), those who want to work selflessly and ready to serve their supreme valor for the nation’s interest, “COME & JOIN THE MISSION For INDIA – NDA Preparations”. Become its part as choosing Bidyasagar Classes Best Coaching Classes for NDA in Bhubaneswar .

Upcoming NDA Exam 2021 Details As Below:-

There are total 320 Posts

UPSC will hold Naval Academy (NA) Examination (II) and National Defence Academy (NDA), 2020 for admission to the Indian Air Force, Indian Navy and Indian Army wings of the National Defence Academy for the 138th Course, and for the 100th INAC starting from 2 July, 2020. The schedule of Union Public Service Commission NDA NA 1 exam may be held in 2021.

. Eligible people can apply online through UPSC (Union Public Service Commission) Online Portal before 15th July 2018. The NDA 2017 application form can be filled through online or offline.Number of vacancies at NA (Naval Academy): 55 (10+2 Cadet Entry Scheme)Number of vacancies at NDA (National Defence Academy): 355How to apply NDA 2021 online form: Eligible people can apply at upsconline.nic.in.Apply Online Here : http://upsconline.nic.in/mainmenu2.php Application Fee: Interested people have to pay Rs.100/- (excluding ST / SC candidates/Sons of OR /NCOs/ JCOs). You can deposit the money at any SBI branch via NEFT or cash facility.

Examination- NDA-I and NDA-II
Date Period- 25 December to 25 January. & 25 May to 25 June.
Examination  Date- 2nd April on Sunday & Sept. Last Sunday.
Date of SSB- July to October. & January to April.
Joining Date at NDA- January & July
These are the various posts in NDA. With the help of this Entrance Examination; you will get entrance in defense career. As we know the level of competition is high. So you to join a brilliant Coaching Centre for NDA Entrance Exam in Bhubaneswar.

In order to assess basic intelligence,verbal & non- verbal intelligence test is taken for the candidates. Candidates are also supposed to go through group tests, i.e. group discussions(GD), group-planning, outdoor group tasks and to give brief lectures on particular topics. These tests are conducted to examine the mental ability of the candidates.

Part A (English) –Grammar and usage, vocabulary, comprehension and cohesion in extended texts to test the candidate’s proficiency in English.

Part B (General Knowledge)–The question paper of General Knowledge will cover all the subjects: Physics, Chemistry, General Science, Social Studies, Geography and Current Events.These topics should not be taken as complete and questions on the same subject not specifically mentioned in the syllabus can be asked as well.

Elementary knowledge of human body and its important organs. Common Epidemics, causes and prevention.Food-Source of energy for man. Constituents of food Balanced diet. Difference between the living and non-living.
Basis of Life-Cells, Protoplasm’s and Tissues.
Growth and Reproduction in Plants and Animals.The Solar System, Achievements of Eminent Scientists.